Wakefield is a cathedral city in the Wakefield District of West Yorkshire, England, on the River Calder and the eastern edge of the Pennines, the district has a population of 345,083.

The name "Wakefield" may derive from "Waca's field" – the open land belonging to someone named "Waca" or could have evolved from the Old English word wacu, meaning "a watch or wake", and feld, an open field in which a wake or festival was held. In the Domesday Book of 1086, it was written Wachefeld and also as Wachefelt.

The Battle of Wakefield took place in the Wars of the Roses and it was a Royalist stronghold in the Civil War. Wakefield became an important market town and centre for wool, exploiting its position on the navigable River Calder to become an inland port.

In the 18th century, Wakefield traded in corn, coal mining and textiles and in 1888 its parish church acquired cathedral status. 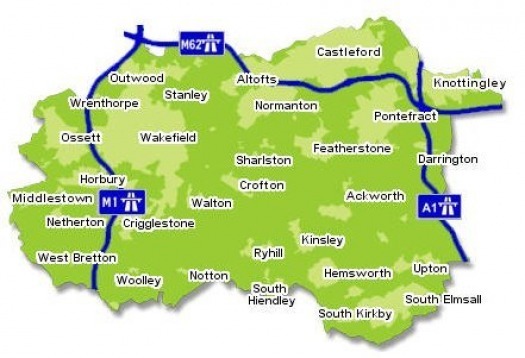 Wakefield's location at the heart of England and at the centre of the UK's communications network offers unsurpassed transport links, providing fast connections by road, rail, and air. The district is well placed to access other regional centres such as Leeds, Sheffield and York. Manchester, Liverpool, and Newcastle are also within easy reach.

The district has emerged from over a century of reliance on coal mining to become a thriving manufacturing, shopping and distribution centre, taking full advantage of its place at the heart of the region's transport network.

Wakefield council covers some 338 square kilometres and has a diverse range of city, urban and rural communities, and an amalgam of what were previously 14 different local authorities.

The north west includes Horbury, Ossett, Wrenthorpe, Stanley and Altofts, while Normanton, Castleford, Pontefract, Knottingley, Featherstone and a host of smaller settlements make up the five towns. In the south east, there are the towns of Hemsworth, South Kirkby and South Elmsall as well as other communities.

Some 70 per cent of the rural communities of the district is designated as green belt. Dotted about the rolling countryside are villages like Middlestown, Crigglestone, Crofton, Woolley and Ackworth.

Wakefield’s picturesque landscapes have inspired great artist and sculptors throughout history so it’s no surprise that renowned sculptors Dame Barbara Hepworth and Henry Moore were both born here. Celebrate this art heritage with a visit to The Hepworth Wakefield and Yorkshire Sculpture Park. Both are proud to be multi-award winners and home to world-class artwork from artists across the globe.

Celebrate the famous Yorkshire Forced Rhubarb with a weekend packed full of live cookery demonstrations, street food, family workshops and more at the Wakefield Festival of Food, Drink and Rhubarb held every February. Then, in July, delight your taste buds at the sweetest festival of the year, Pontefract Liquorice Festival celebrating the town’s historic link with the flavoursome plant.

Wakefield is ideally located for businesses of all sizes and sectors, providing easy access to major transport links. It is also in close proximity to the city of Leeds. Whether a branch of a large corporation or a new business startup, Wakefield is an ideal location for a business wishing to grow.

This is where our seo wakefield agency can help you.

Follow the link to see how we put your business first.